The Growing Universe - Worlds Beyond 1 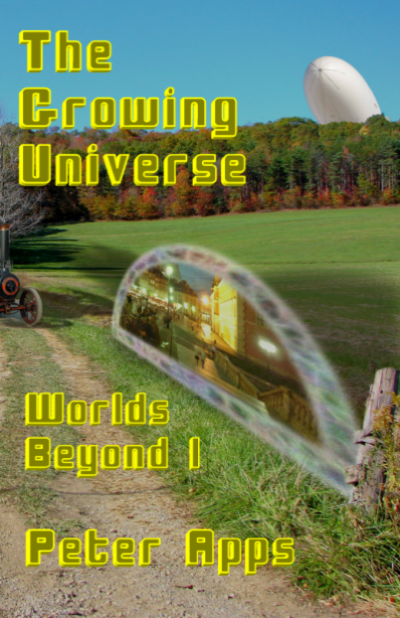 Who is David? Is he just a thirteen year old boy with a strange delusional amnesia or is there something more?

When he is found unconscious by the roadside with a gash to his head, he does not have anything to identify him. When he comes round, anything electrical fascinates him as if it is a whole new concept and he has little idea of the world around him. What he does have, are stories of a largely steam driven world, an impressive but curiously old-fashioned education and a claim to be the Duke of Barabourne, a dukedom that did not exist.

Follow David as he searches for answers and discovers a universe larger than anyone could imagine.

School sucked but there again at thirteen, school usually did suck. Still, it was a novel way of describing his dislike at being stuck in a classroom on a warm spring day though it was not entirely the school’s fault for his dislike. He was found unconscious, a bad gash to his head and blood on a nearby stone. He came round in a nearby hospital, confused and unable to clearly identify himself. He claimed to be David Pevensey, the 19th Duke of Barabourne living at his ancestral home in Kent, insisting that everyone called him 'Your Grace'. Since there was no Dukedom of Barabourne and never had been, the doctors responded by subjecting him to a barrage of tests but the test results left them as confused as David himself was.

Obviously well-educated, he spoke classical Latin and Greek, as well as being fluent in French and German, and used a very precise if slightly old-fashioned English. Anything electrical fascinated him yet he had to be shown how to turn on a light. He would also stand and stare at the traffic in undisguised amazement. It concerned the doctors that he did not so much forget his delusions as accept his new persona as plain David Pevensey, but they could hardly keep him in hospital in case he relapsed so he was placed with a foster family used to handling disturbed and damaged children.

“He’s a polite and well-behaved young man.” The carer from the fostering service explained, “We are concerned that his delusions may cause problems and we don’t know what they may be blocking out.”

However, his delusions did not cause many problems. He worried that he could not dress for dinner, he claimed to have been out riding and his boots, jodhpurs and roll-neck jumper fitted in with that. Hamburger with chips smothered in ketchup was a novel meal though he was decidedly uncomfortable eating with his fingers. He tried to make the best of the situation and fit in but it was obvious he was used to better things. His foster family's children tolerated him, the consensus being that he was weird but it was definitely a nicer weird than many of the other foster children.

Sometimes his delusion surfaced; on one occasion he remarked, “Many of my old circle would just dismiss you all as part of the criminal classes. They don't know anything.”

Luckily his new family recognised a compliment but he remained definitely weird. They got their own back, laughing as he struggled to ride a bike, then stared in horror as he rode triumphantly off, oblivious to the traffic.

His head injury healed and the doctors deemed that he was fit for school. Luckily one of his foster brothers was in the same class and after the bicycle incident kept an eye on him. Although he managed a restraining hand when David tried to stand for the teacher, he could not do anything when David was asked to tell the class about himself but David was learning.

“No-one knows who I really am.” he said, “I do have memories of another life but if those memories are true then I've come from a long way away.”

“You mean Australia,” a girl called out, “You sure talk funny.”

David bowed politely and replied, “I'm pleased to have entertained you, Miss, er… I'm sorry but we haven't been introduced.”

The girl blushed as the class laughed.

“We were warned that you have amnesia.” Mrs Smith, the teacher said, “But this is a creative writing class. Would you be prepared to discuss your memories as a tale of imagination?”

“Ma'am, it would be a pleasure to talk about them on that basis.” David replied, “They are so real but I can’t discuss them with anyone. May I introduce myself according to my memories. I am David Pevensey, the 19th Duke of Barabourne. I was due to start at Harrow soon but instead I find myself here.”

“Harrow.” Mrs Smith exclaimed, “This must be quite a comedown for you.”

“Before staying with Danny and his family I would have agreed, Ma'am.” David replied, “However you look at it, I'm seeing two worlds and there's a lot to be said for this one though I'd still prefer servants to make the bed and do the washing up.”